The Silencing of God Program 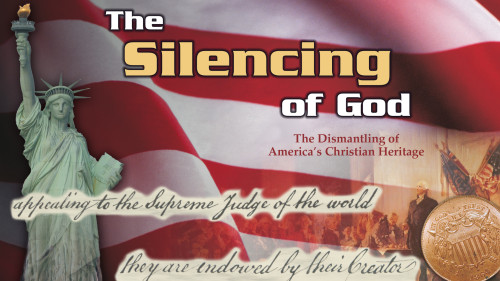 Take a trip back to the Withered Roots and vanishing values of America’s past. You will not believe your eyes and ears. America is in the throes of a full-scale Culture War. The Dismantling Of America’s Christian Heritage.
Did the Founding Fathers...
- Advocate “separation of church and state?”
- Reject expressions of Christianity in government and public schools?
- Intend for federal institutions to be religiously neutral?
- Approve of same-sex marriage?
The Silencing of God Seminar issues a stirring plea to the nation to... (1) Return from the depths of moral depravity. (2) Reclaim our Christian heritage. (3)Reaffirm Biblical values in public life. The moral and spiritual underpinnings of American civilization are collapsing. “A must see for every American”

From Series: Category: Christian EvidencesVideos in this Program

America's Most Pressing Concern…Separation of Church and State?Evidence for God | Proof for GodWhy God?